The Extreme History Project in partnership with the Museum of the Rockies will present
“Archaeology in the Archives: Fort Parker and the Bozeman Economy”

Before digging in the dirt, archaeologists dig into dusty archives to reconstruct the historical context of their site. Historians and archaeologists, Marsha Fulton and Crystal Alegria, have been combing through documents, letters and reports concerning Fort Parker, the first Crow Agency in order to better understand its role and significance to the area. Fort Parker, near present day Livingston, Montana, served as warehouse and distribution point for the goods and supplies given to the Crow Indians in exchange for a large portion of their territory. As a government-funded entity, the agency offered an economic boon to the growing Bozeman community. Through constructing, hiring, freighting and trading, Bozeman citizens and merchants found the “Mission Agency” to be a lucrative financial pool stemming from business both legal and shady.

Join Marsha Fulton and Crystal Alegria as they reveal the economic ties between burgeoning Bozeman and Fort Parker, the first Crow Agency.

Free and open to the public.

The Extreme History Project Lecture Series is sponsored by the Archaeological Conservancy and Humanities Montana.

Please join Marsha Fulton from The Extreme History Project for this amazing class,

“The path of the Goddess: The Sacred Feminine in Ancient Art and Culture” 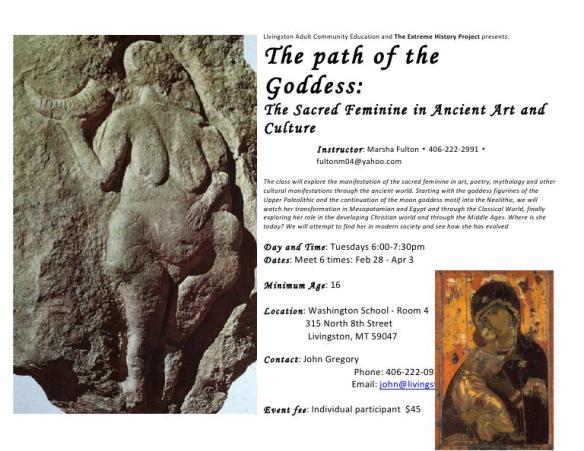 Click the link above to listen to Joanne Shenandoah, Grammy Award winning Native American musician, speaking about The Extreme History Project. Below is the announcement for their beautiful new Lecture Series!

“Partnering for Public History- The Extreme History Project and the Museum of the Rockies Offer a Unique Lecture Series.”

LIVINGSTON, Montana– Feb. 2, 2012-  The Extreme History Project is partnering with the Museum of the Rockies and the Archaeological Conservancy to bring a series of free public lectures that offer new perspectives on history, anthropology and archaeology. The first in the series, “The Dawn of Montana Archaeology,” will be presented by Nancy Mahoney, Adjunct Professor, Department of Sociology and Anthropology at Montana State University.  The lecture will take place on Feb 9, 2012 at 6 PM at the Museum of the Rockies, Hagar Auditorium in Bozeman.

Lecture topics in the series will include local archaeology, archaeo-astronomy, folklore and ritual in archaeological assemblages, American Indian music and environmental history as well as many others. The lectures will be held at both the Museum of the Rockies and the Community Room of the Livingston Public Library in Livingston.

This first lecture, “The Dawn of Montana Archaeology,” given by Nancy Mahoney, will discuss her research on the Joseph L. Cramer and Oscar T. Lewis Archaeological Collection located at the Museum of the Rockies. Containing archaeological materials from Montana and Wyoming made during the first half of the 20th century, the collection contains artifacts and documentation from some of most significant archaeological sites in Montana. Pictograph Cave, the Hagen Site, the Billings Bison Trap Site, as well as places of significance to the Crow Nation are included in the collection.

The March 29th lecture will be presented by Shane Doyle, Board Member for The Extreme History Project and PhD. Candidate in Education at MSU Bozeman.  As a Crow tribal member himself, Doyle will sing and share from his own traditional knowledge about the history and meaning in Native American Plains tribal music.  The lecture will be held at the Community Room of the Livingston Public Library in Livingston.

The April lecture will celebrate Archaeology Month and feature co-founders and directors of the Extreme History Project, Marsha Fulton and Crystal Alegria. The lecture, “Archaeology in the Archives- Ft. Parker and the Early Bozeman Economy,” will elaborate on the massive influence that Ft. Parker had upon the growth and early development of Bozeman. The event will be held at the Museum of the Rockies.  Details for this event and future lectures will be announced soon.

The Extreme History Project is a local public history organization that strives to bring cutting-edge research in the Sciences and Humanities to the general public by opening up dialogues surrounding their shared mutual histories. Bridging communities and revealing the true history results in the promotion of healing, tolerance and peace through a new public awareness of the past.

The Museum of the Rockies is the premier institution in the region for history, anthropology and the natural sciences. As well, the Archaeological Conservancy, whose significant work preserves and protects hundreds of prehistoric and historic archaeological sites all over the country, garners enormous respect. The Extreme History Project is proud to be in the distinguished company of these respected institutions.

For more information on the series, visit these websites or call the Museum of the Rockies at 994-2251

These organizations may be reached at:

The Extreme History Project wishes to thank Joanne Shenandoah for her beautiful PSA announcement, above, which will be used in promoting the year long lecture series!  Music from Joanne’s new CD, “Lifegivers” will be played before and after all the lecture series, with our thanks!

and to purchase your very own new Lifegivers CD, visit:  http://www.cdbaby.com/cd/joanneshenandoah